Outright Monetary Transactions
&
Quantitative Easing
Combined Weapons of Fiscal Mass-Destruction
Like our sister organization the EZB the EOZB takes its main task of stabilising the
euro's purchasing power and thus price stability in the European Union very
seriously. Therefore our Stability-Division is greatly concerned since Mario Draghi
said last year just one word “Unlimited”! From this day on the EZB was ready to buy
unlimited quantities of government bonds from the euro-zone countries if they
requested aid from the European Stability Mechanism thus triggering jubilation in the
financial markets.
At first sight the Outright-Monetary-Transactions policy was successful via
stabilizing the interest rates of the government bonds but at second sight it will pave
the way into an European crises affecting us the people of Europe. If we want to
know why we have to take look at the following graph showing the economic
development of the indebted countries: 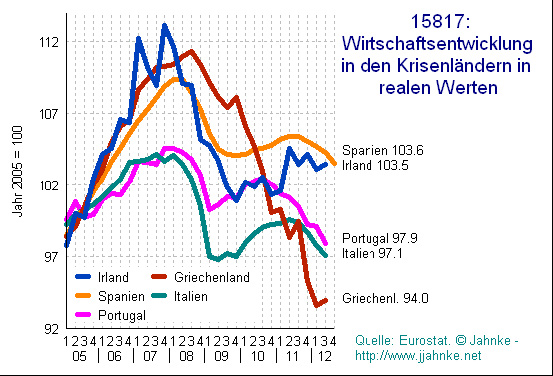 The recession is the direct consequence of the austerity measures of the Troika on
the indebted countries in Europe. Instead of reducing the debts of these countries the
ever faster unfolding economic downturn is leading to higher debt ratios despite the
austerity policies implemented on the countries thus defying economical lore to the
core! If the recession goes on there will come the point when the bond holders will
lose their trust in them. Quite the opposite we can observe in Island where the
creditors had to pay. Here a question arises: Did Draghi really study economics? Or
do we have here another case of Gutenberg? We will know soon. A team of our
Quality-Management-Division is already on the task – thanks to Google it will be
easy to prove!
To make things worse we can observe the ongoing policy of qualitative easing of
the ECB resulting in cheap money flooding the financial markets like nothing was
amiss. Last October we evaluated a plus of 3,9% of the money supply M3 while
economic growth in the euro zone was going negative hence representing the illness
of modern central banking policies. If Draghi knows some economics he should be
aware of the logical consequence of a money supply outstripping economic growth –
inflation!
Luckily macro-economics is far more simple than economists wants us to believe.
Therefore we have a question to the chief economist of the ECB: What will happen
when the financial markets loose their trust in the government bonds of the indebted
countries while OMT is ready for action? The bondholders will sell their bonds which
will be bought by the ECB in unlimited quantities holding the banks in business and
thus creating liquidity. At the same time the ECB will flood the European markets
which cheap credits enabling the banks to buy what can be bought in the real world
resulting into an even faster enfolding inflation in the euro-zone? What will be the
outcome of this scenario?
To understand what will happen we take a look at these two graphs. The first shows
the bad credits of European banks. The second shows the leverage ratio of
international banks:
Truth to tell the European banks are more or less insolvent kept afloat by the cheap
money of the ECB. When the European economics will start to disintegrate they will
implode. Now comes the ESM into play which is designed to rescue the big banks in
case of emergency. The outcome will be small banks going Bankruptcy in the
thousands (The difference of the US compared to Europe – it already happened on a
small scale) while the big institutes will be rescued resulting in the biggest market
consolidation in the history of our banking system and Anus Jains words in his
speech to his staff when he became CEO of the German Bank will come true: only 5
will be left! All the while the people of Europe will experience the biggest
economical crises in their history! At this point we advice our sister institute the ECB
to remember its independence and follow the lead of Island and letting the Banks go
insolvent while saving the money of us the people!